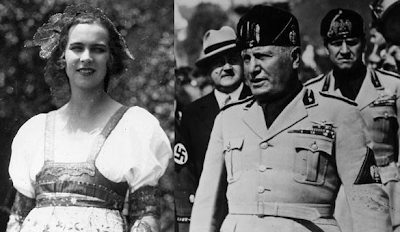 This story has been talked about much in the recent days, so I will give my thoughts here instead of to each one. The issue, spoken of by The Mad Monarchist and The Cross of Laeken among others, involved the rumor that Princesse Marie-José (who would be the last Queen of Italy) who was the daughter of SM King Albert I of the Belgians, had a short affair with the infamous Italian dictator Benito Mussolini. Many media people are saying the rumors have now been proven but that is certainly not the truth, all that has been proven is that Mussolini's son, who was just a teenager at the time, mentioned the gossip in writing. I do not think anyone who has written about this, in the media, to believe any of it have any knowledge or understanding at all about Marie-José or even Mussolini. From everything I have read on the subject, far away from any affection for each other, the two were closer to hating each other greatly.

I have read one book about Mussolini's rule in Italy (a very big book I had to read for group project) stated that the regime of Mussolini disapproved of Marie-José because she was the opposite of what they thought a good Italian woman should be. She was too thin, her hair was too short, she was too fashionable and she was too independent. That is naturally not what the Fascists wanted women to be like, they wanted them to be matronly, mothers and obedient. Also, we know that the Princess plotted against Mussolini, along with others, because she was so opposed to him and his totalitarian rule over Italy, she supported the dissidents against him and tried to have him overthrown from power. She was probably his biggest enemy of all in the Family Royal of Italy and she also had been raised with the values never to do something like that and in fact such an affair would have been unthinkable for her.

Mussolini, we know, had affairs all the time with lots of different women and maybe he wanted people to think that he had, and just spread the rumor around himself because Marie-José was the most beautiful and glamorous princess around. However, if there was any truth of that Mussolini would have been telling everyone and there would be lots of evidence for it instead of there being none but a mention in some old Mussolini family letters. There is no way any of this makes any sense. Marie-José was a very liberal, liberty-loving person, totally the opposite of a Fascist dictator and Mussolini never said anything even kind about her. She was in every way the kind of woman he did not like and he considered a bad influence on Italian women. This story is just a lurid tale to injure or harm, I think just because Mussolini was the dictator and Marie-José was the most famous and glamorous woman in Rome and people just have to make up something to link the two. But it is illogical, unreasonable and too fantastic for any person to believe.
Posted by BelgieRoyalist at 2:12 PM