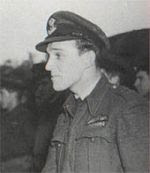 Colonel Remy Van Lierde was a great hero of the Free Belgian forces during the great World War II. He was originally from Overboelare and joined the Aviation Militaire Belge on 16 September 1935, first to train as an observer but in 1937 he began training as a combat pilot and qualified in 1938. When his training was completed he was stationed with the 3rd Squadron, 1st Aviation Regiment. When World War II came the Belgian Air Force was very much un-prepared and Remy Van Lierde, with the rank of sergeant, flew reconnaissance during the German invasion in an old, out-of-date Fairey Fox III biplane. German flak shot down his plane and wounded him on 16 May 1940 and he was taken prisoner. However, the brave air soldier did not give up and when he was recovered he escaped and made an arduous journey out of Belgium, across occupied France and into Spain, which was a neutral country but with a fascist leader (General Franco) who was sympathetic to the Axis (Mussolini and Hitler had helped him win his war against the communists in Spain). Remy was arrested for crossing the border illegally and was sent to various Spanish prisons before being sent to the notorious concentration camp at Miranda de Ebro. No cage could hold him! He escaped still again and finally on 22 July 1941 he reached the safety of England.

To make sure he was legitimate he was interviewed by the James Bond-types at MI5 and once cleared he joined the Royal Air Force Volunteer Reserve. After three months of training he was assigned to the 609 Squadron in 1942 as a Pilot Officer. In the summer, flying a Spitfire Mk.Vb. he damaged a German bomber over Skegness and was promoted to Flying Officer. In 1943 while flying a Typhoon Ib he won his first victory, shooting down a Bf 109-G fighter making a raid on the south coast. In March he shot down a Ju52 transport plane while going to attack a German air base at Chièvres. His wife actually saw him do it and when the war was over she showed him bits of the wreckage she saved from their garden. Later, Remy Van Lierde became the first pilot to drop bombs from a Typhoon and he shot down a He111 bomber in May, another Bf109 in July and a Ju88 heavy fighter in October. He destroyed another German plane on the ground and won his last victory shooting down a Bf 110 bomber in November. His total score was 6 planes shot down and 1 destroyed on the ground making him one of the 14 Belgian "aces" of the war.

Promoted to Flight Lieutenant he served for a little time as a gunnery instructor and was then promoted to Squadron Leader to command the No.164 Squadron to combat the V-1 rocket offensive. During this part of his career he shot down or otherwise destroyed 44 V-1 rockets by himself and shared another 9 victories. He was the second-highest scoring destroyer of the rockets in the war. He later led his squadron in the Allied offensive on the western front and later as Belgian Liaison Officer at 2nd Tactical Air Force HQ. He was decorated with the Distinguished Flying Cross with two bars by the British and given command of the 350 RAF Squadron after the war which had all Belgian pilots and would later be transferred to the Belgian Air Force in 1946. Back in the Belgian service he was promoted to major and given command of the 1st Fighter Wing at Beauvechain Air Base. He was given a number of other top priority positions and in 1953 was given the honor of being made an aide to SM King Leopold III.

In 1958 he became one of the first Belgians to break the sound barrier while test flying a Hawker Hunter at Dunsfold Aerodrome in England. As Lt. Colonel Van Lierde he was made Deputy Chief of Staff to the Ministre of Defense in 1954. In 1959, as full Colonel, he commanded the air base at Kamina in the Belgian Congo. While there, on a helicopter trip, he discovered the mysterious Giant Congo Snake of which the head was 3-feet wide and when he hovered closer it rose up 10-feet out of the water, so he couldn't get too close to it. So, he was something of an explorer and naturalist as well. After returning to Belgium he became the Chief of Operations of the Chiefs of Staff and had several other appointments before his retirement in 1968. Colonel Remy Van Lierde, hero of World War II and flying ace died at Lessines on 8 June 1990.
Posted by BelgieRoyalist at 11:31 AM