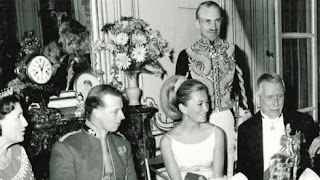 If you have read some of the history of the downfall of Napoleon or seen the famous movie "Waterloo" you will remember the glamorous ball held by the Duchess of Richmond in Brussels. This was held for the officers of the Allied army, local officials and celebrities and everyone was there when word came from the Germans that Napoleon was advancing on Brussels. That is when the Duke of Wellington, the Prince of Orange and the Allies all left to join the army and stop Napoleon at the battle of Waterloo.

This year the ball is being held again at the British embassy in Brussels. In 1965 and 1995 it was also held to commemorate the anniversaries of the battle of Waterloo (you can see Queen Paola at the ball in the picture in 1965). This year the ball will be to benefit many Anglo-Belgian charities such as the Royal British Legion, Belgian Red Cross and others.
Posted by BelgieRoyalist at 12:12 PM

Email ThisBlogThis!Share to TwitterShare to FacebookShare to Pinterest
Labels: napoleon