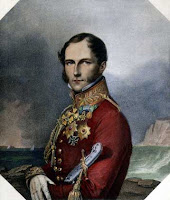 Right now, everyone in the European Union is talking about and worried about the situation in Greece and the economic situation in general but particularly about the problems in Greece. Will they enact the austerity measures? Will Greece leave the Eurozone? Will the problems in Greece cause wider problems across the European Union? Not many Belgians may be talking about Greece right now but certainly it is not far from the minds of those at the European Union government in Brussels. How to deal with the crisis? What can be done? I do not have the answers but it causes me to consider the royal connection between the Kingdom of Belgium and the early days of the Kingdom of Greece. Both countries emerged to independence in the same period and both countries looked to have a monarch who would help them gain security from the "Great Powers" of Europe at that time. If different choices had been made in Greece we Belgians might have a totally different Royal Family today. What similarities are there today with the current situation in Greece?

King Leopold I was the first King of the Belgians, and a very greatly admired and respected national leader all over the world, but the throne of Belgium was not the first kingdom he was offered to preside over. The Greeks had claimed independence to break away from the Ottoman Empire of Turkey in 1830 and were in need of a monarch. A prince from a powerful royal family or with, at least, family ties to powerful countries, was preferred to help secure Greek independence as a policy of insurance against efforts by the Turks to retake Greece. Prince Leopold of Saxe-Coburg-Gotha was considered and was asked to come reign over the new Kingdom of Greece. The cause of the Greeks had been a popular one in Europe, seen by many as a great romantic adventure and there was much sympathy for the Greeks against the Turks. Prince Leopold was not unaffected by this and he considered seriously accepting the offer to become the first King of Greece or King of the Greeks.

But we know how Prince Leopold was a very thoughtful and far-thinking man. He wanted to accomplish great things but he did not want to take great risks needlessly. After reviewing the Greek situation, he did not have much confidence in their chances of success. The population seemed too divided, the situation was too unstable and there were not the resources to ensure to a reasonable degree the long-term success. Finally he decided to decline the offer of the Greek throne and he stayed in England where he was living at the time. Later, he accepted another offer to become the first King of the Belgians but Belgium was in a better position to be supported by the other powers and he required first a sufficient amount of financial support to put the new Kingdom of Belgium on a solid foundation for future growth and success. After looking back at the fate of the first Bavarian Prince Otto who became King of Greece, compared to the loyal support of the Belgians even in the year of crisis, certainly King Leopold I never had regrets for his decision.
Posted by BelgieRoyalist at 9:19 AM

Email ThisBlogThis!Share to TwitterShare to FacebookShare to Pinterest
Labels: greece, leopold i